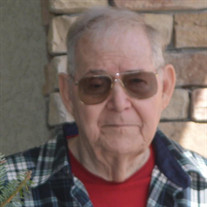 Wesley Elmer Davis, 80, born in Bay City, Michigan passed away on October 21, 2020, shortly after being diagnosed with a degenerative neurological condition Lewy Body Dementia. Soon after graduating high school, Wesley married Alice Gustafson on November 17, 1960. Wesley went on to work for Sea Ray Boats in Oxford, Michigan where he was a supervisor for 22 years before retiring to DeBary, Florida Wesley became interested in Amateur Radio in 1964 using a CB (Citizen’s Band) Radio which had 23 channels and his handle was Sad Sack. This interest grew into a lifelong hobby. He later turned to Ham Radio and earned his Amateur Radio license with the call sign of WD8JTJ. He participated in numerous Ham Radio Field Days talking to others around the world and even had his own repeater. In his spare time, he loved playing cards with friends, spending time with family and cherished classic movies and the music of his youth. Wesley is survived by his wife, Alice (married for 59 years). He will always be remembered and loved for the strong support he was to his family. Wesley also leaves behind his four children, June (Joe) Reames (Smyrna, Delaware), Scott Davis (Mountain City, Tennessee), Debbie Behrens (Fruitland Park, Florida), and Chad Davis (Port Richey, Florida) as well as his (5) grandchildren: Jason, Jaclyn, Emma, Kristen, and Tyler, and his (4) great-grandchildren: Damian, Brandon, Jaden, and Tavareo. Wesley also leaves behind his sister, Lisa van Leeuwen. Wesley was preceded in death by his parents, Elmer & Ethel Davis, and his brothers, James Edward Davis, Brian Arnold Davis, and Patrick Dwyer. Private Graveside Service will be held with the Family. Wesley’s life suited his card playing philosophy – It’s not about the cards you’ve been dealt, It’s how you play your hand. WD8JTJ over and out you will be missed. In lieu of flowers, family asks that donations be sent to Vitas – Volusia/Flagler.

The family of Wesley Elmer Davis created this Life Tributes page to make it easy to share your memories.

Send flowers to the Davis family.