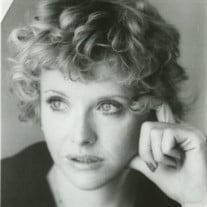 SSkye Aubrey was born December 21rst 1945 in Evanston Illinois, she passed from natural causes on November 27 2020 in Debary Florida where she resides with her daughter Anastasia Newsome and her grandson, Elijah Sewell (the apple of her eye). She is also survived by her only brother James Aubrey. Skye was discovered while studying at RADA in London by David Merrick to star on Broadway in Cactus Flower. Skye was the third generation - on her mother’s side – to shine on stage, following in the footsteps of her grandmother, Phyllis Schuyler Thaxter, and her mother, Phyllis St. Felix Thaxter. Skye’s father James T. Aubrey JR. Also a Hollywood legend, known for reinventing the television industry For more than three decades, Skye guest starred in virtually every classic TV series including Fantasy Island, Marcus Welby, Love American Style, Ironside, Owen Marshall, Thriller, Toma, Banyon, Batman, Green Acres, Emergency, The Most Deadly Game, Insight, Switch, and Superboy. She also won raves for her film work on the big and small screen – most notably in The Carey Treatment with James Coburn, The City with Anthony Quinn, A Very Missing Person with Eve Arden, The Phantom of Hollywood with Jack Cassidy, and Vanished (TV’s first-ever mini-series; with William Shatner). Skye credits one of the highlights of her career as co-starring with her mom, veteran actress Phyllis Thaxter, in the TV movie, The Longest Night. Skye took a hiatus from acting in the 1980’s to raise her children, Anastasia and Sebastian (Sebastian passed away in July, 2017 in Colorado Springs), and co-produce the Christopher Reeve Superman franchise. Soon after, she was hired by the government of Hungary to represent Hungarian films in the USA and promote international filmmaking worldwide. In 2005, Skye returned to the movies in the cult film Bollywood And Vine, garnering a new generation of fans. Always one to nurture new talent, she brought in several of her acting students to make their film debuts. Skye also had the pleasure of working with her daughter Anastasia in the film - just as she had worked with her own mother years before. In 2019, Skye returned to the stage, starring in the Pacific Northwest revival of Mae West’s groundbreaking play, Sex. At the time of her passing, Skye was preparing to play the lead in another play, The Waverly Gallery. Skye is greatly missed by family, friends, and devoted fans. “The show must go on.” Skye Aubrey

SSkye Aubrey was born December 21rst 1945 in Evanston Illinois, she passed from natural causes on November 27 2020 in Debary Florida where she resides with her daughter Anastasia Newsome and her grandson, Elijah Sewell (the apple of her eye).... View Obituary & Service Information

The family of Susan "Skye" Aubrey created this Life Tributes page to make it easy to share your memories.

Send flowers to the Aubrey family.