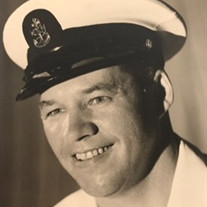 Sam George Rollings, born to Samuel Walter Rollings and Helen Elizabeth (Miller) Rollings on August 22, 1926 in Middletown, NY. He passed into the arms of Jesus on January 11, 2018 following a year long battle. Sam is survived by his loving wife of 69 years, Helen (Betty) Rollings. Sam was predeceased by his parents, and brother, Victor Rollings. He is also survived by sister, Edith Gauqui of Victorville, CA, and Raymond Rollings of Middletown, NY, daughter, Charlene Renaud of Deltona, Fl, sons Michael Rollings and wife Sharon of Coventry, RI, and Stephen Rollings and wife, Deborah of Tiverton, RI. Sam proudly enlisted in the US Navy at 17 years old until retirement as Chief Petty Officer in 1965. He served on several ships, longest with Air Craft Carrier, USS Randolph. He deployed on Med Cruises, a chance allowing him to see Rome, France. He had shore duty in Virginia Beach, Panama and Bermuda. His last position as a buyer for the commissary and exchange. This experience brought him to Sales on the outside, selling to the commissary and Exchange. He and Betty lived in RI for many years, before coming to Florida in 1991. He joined the West Volusia Senior Baseball; with a position mostly as pitcher. Betty always cheered him on, every game! Sam also joined the AMF Bowling, mixed Leagues in Orange City. He nearly made a perfect 300 game several times. Sam was a cheerleader of most sports. Watching them, reading about them and listening on the radio. His most favorite Team was the Boston Red Sox. Sam was a man of character, dignity, patience, and love. He lived by the ten commandments. Sam is also survived by Grandchildren, Michelle Canto, Joseph Silvia, Lauren Rollings, Samantha Rollings, Melanie Marchetti, Melissa Rollings, Pam Renaud, and several Great Grandchildren. A gathering of Family and Friends will be held at 12:00, Thursday, January 18, 2018 with services at 2pm at the Baldauff Funeral Home, 1233 Saxon Blvd, Orange City, fl.

Sam George Rollings, born to Samuel Walter Rollings and Helen Elizabeth (Miller) Rollings on August 22, 1926 in Middletown, NY. He passed into the arms of Jesus on January 11, 2018 following a year long battle. Sam is survived by his loving... View Obituary & Service Information

The family of Sam G Rollings created this Life Tributes page to make it easy to share your memories.