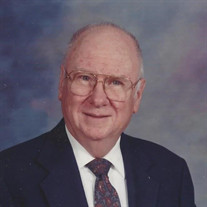 Richard (“Dick”) William Anderson, 89 of Deltona, Florida, passed away April 19, 2018, after years of declining health. He was born November 25, 1928 in Norwood, Massachusetts to William (“Bill”) Anderson and Agnes (“Nessie”) Anderson (née Gordon). Dick lived his formative years in Walpole, Massachusetts and Rochester, New York, during which time, he was a member of De Molay, ran cross-country and played trombone. He served his country in the U.S. Marine Corps, stationed at Cherry Point Naval Air Station. Upon receiving an honorable discharge, he moved back to Massachusetts where he met the love of his life, Colleen, whom he married in 1952. They started a family and moved to Walpole, Massachusetts, where they lived until they retired to Deltona, Florida in the 1990’s. Dick worked as a land surveyor, employed for many years with New England Survey Services. He was justifiably proud of the care he took in performing his work, which was known for its accuracy. Among the significant projects that benefitted from his skills is the Callahan Tunnel in Boston. Dick enjoyed life and people. He was a clever wit, who was capable of laughing big at a funny story or crying at moving music. He had a variety of interests outside of his work life, one of the biggest being his woodcarving, characterized by a whimsical style, for which he garnered awards. He not only had a passion for woodcarving; but he also enjoyed passing it on to others. He worked extensively with woodcarver groups, first in Massachusetts, and then in Deltona, where he helped found the Deltona Woodcarvers Association. He always regretted that Florida soil was not conducive to maintaining a garden as he had done in Walpole. He also served selflessly his various church congregations, including the First Congregational Church in East Walpole and the United Church of Christ in Deltona serving as Deacon, teaching Sunday School, and serving as a member of the Search Committee. However, of most importance to Dick was his family: his dear wife, Colleen, and their two sons, Mark and Ross. To the end of his days, Dick’s first concern was their well-being. He and his wife were married 63 years, and were only parted by her death in 2016. It was a comfort in Dick’s last days to have both of his sons present. Before he could allow himself to let go of this life, he first sought assurance that they were all right. Dick and Colleen also filled their lives with adventure. Family camping in Maine and around the rest of New England turned to even more adventurous outings in their retirement years, such as extended trips to England, Scotland, Australia, and New Zealand. And always they visited parts of Florida, Massachusetts, Maine and New Hampshire to visit with their many family members and friends. Even in the wake of Colleen’s passing in 2016 and his own ever declining health, Dick always impressed those he knew with his social graces and his ability to make them feel special. He was always a wit and a charmer. His passing leaves a whole in the lives of all who knew him. Dick is preceded in death by his wife, Colleen Anderson, parents, Bill and Nessie, his brother, Gordon Anderson and his niece, Kristen Mooney. He is survived by his sons, Mark Anderson and his life partner Sharon Murphy, and Ross Anderson and his wife Ann, and numerous family members, including nephews, nieces, and their children. Of special closeness to him in Deltona were nephew David Anderson, his wife Cindy, and their daughters, Allyson and April. The family has planned a memorial service: July 7, 2018 at 11:00 am Service at First Congregational-Christian Church 19 Gloucester Hill Road New Gloucester, Maine 04260 Followed by interment at the cemetery Followed by refreshments and remembrance back at the church hall until 2:00 pm Donations, in lieu of flowers, can be made to The Michael J. Fox Foundation (https://www.michaeljfox.org/), or any charity of choice

The family of Richard W Anderson created this Life Tributes page to make it easy to share your memories.

Send flowers to the Anderson family.