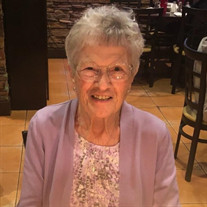 Mary P. Viola , 98, of Deltona Florida passed away on May 15th, 2022. She was born on March 19th, 1924 in Brooklyn New York to parents Domenick and Ida Pagnotta. Mary is survived by her daughter Andrea Roth, son-in-law Charles Roth and grandchildren Jade Roth and Devin Roth of Wisconsin, her sister Ida Mercurio, brothers, Saverio Pagnotta and Joseph Pagnotta, sister-in-law Angela Pagnotta, as well as many nieces and nephews. She was preceded in death by her parents, her loving husband, Andrew Viola to whom she was married almost 70 years and her sister Adeline Raimond. Mary grew up in Brooklyn, New York, in an Italian family. Her first language was Italian in deference to her grandmother with whom the family lived. She spoke fluent Italian for the remainder of her life. Mary graduated from high school at the age of 16. Her greatest wish was to be able to attend college which was nearly impossible for a young woman of that era. She worked for a time as a dental assistant until she obtained employment in the Brooklyn Navy Yard during World War II. She gave all of her earnings to her father to help support the family. Soon thereafter, she found an office job in Manhattan where she would soon meet the love of her life on the very day he was discharged from the Army after serving in World War II! Andy had come to visit his former employer and found his wife. It was love at first sight (for him)! That day, he told his mother that he had met the woman he was going to live with the rest of his life! Marriage followed shortly thereafter. Mary continued to work while Andy attended college on the GI Bill. Many women in Brooklyn did not work or drive a car, but Mary did both. A few years later, Andrea was born and Mary became a stay at home mother. Andy requested that his employer transfer him to Miami, Florida and when that wish was granted, Mary was elated. The family moved from Brooklyn, New York to Miami, Florida in the summer of 1965 and never looked back. Mary became a highly valued employee of the Broward County School System. Eventually, she became the secretary to the principal of Flamingo Elementary School who also spoke Italian. This made them able to converse in secret! When that principal retired and a new principal took over, they became fast friends. In fact, they spoke on her 98th birthday! She made lifelong friends during her time at Flamingo Elementary and that brought her great joy. Mary took up the hobby of ceramics and created many beautiful pieces including a large nativity set which she displayed year round. She gifted many relatives and friends with her beautiful ceramic pieces. Once retired, Mary and Andy purchased land in Deltona, Florida and built a home in which they lived for the remainder of their lives. For Mary, that was thirty years. They became close with all of their neighbors and seemed to draw people to them. Mary was a very thoughtful person who sent birthday cards to all of her relatives including the children of her nieces and nephews! She brought cards and gifts to all of her neighbors on their birthdays. Mary and Andy enjoyed many trips together, including cruises in Hawaii and Alaska. They also visited Andrea when she lived in New York and then in Wisconsin with Andrea, Chuck, Jade and Devin. They enjoyed many vacations where they would share adjoining suites in places like Marco Island. They also enjoyed seeing Disneyworld through the eyes of their grandchildren. They were very involved with St. Clare’s Catholic Church in Deltona, where Mary was a parishioner for almost 30 years. Mary’s church life and friends were an integral part of her life. Mary volunteered in St. Clare’s office for 18 years. Mary’s Catholic faith was at the foundation of her life. In recent months, she was able to watch a Catholic mass daily on her new laptop! Her faith was extremely important to her and sustained her throughout her life. Mary was an amazing woman. After Andy passed away, Mary continued to live in their home until she was just a few months shy of 98! In recent years, she had become much more outgoing. She was surrounded by wonderful church friends and neighbors who thought the world of her. We wish to thank the wonderful people at Brookdale Deland Assisted Living, Halifax Hospice Orange City and St. Clare’s Catholic Church for all of their support. We also wish to thank the amazing friends and neighbors who have been so supportive and loving while Mary was living alone these past five years, especially Cathy Clem, Phyllis Notarino, Lori Moulton, Keith and Michelle Campbell and Josh and Heather Scofield and family. Recently, Mary had been asking the Lord to take her home and her prayers were finally answered. “I am the resurrection and the life. The one who believes in me will live, even though they die; and whoever lives by believing in me will never die.” John 11: 25-26. A Visitation will be held on Wednesday, May 18, 2022 from 11:30am-12:30 pm at Baldauff Family Funeral Home, 1233 Saxon Blvd, Orange City, Fl 32763 with a 1pm Graveside Service at Deltona Memorial Gardens, 1295 Saxon Blvd, Orange City, Fl 32763. A Memorial Mass will be held at St. Clare Catholic Church, 2961 Day Road, Deltona, Fl 32738, immediately following the Graveside Service. In lieu of flowers, donation may be made to St. Clare’s Catholic Church in memory of Mary P. Viola, 2961 Day Road, Deltona, Florida 32738 or to Disabled American Veterans, www.dav.org/donate or DAV, 3725 Alexandria Pike, Cold Springs, KY 41076.

Mary P. Viola , 98, of Deltona Florida passed away on May 15th, 2022. She was born on March 19th, 1924 in Brooklyn New York to parents Domenick and Ida Pagnotta. Mary is survived by her daughter Andrea Roth, son-in-law Charles Roth and grandchildren... View Obituary & Service Information

The family of Mary P Viola created this Life Tributes page to make it easy to share your memories.

Send flowers to the Viola family.