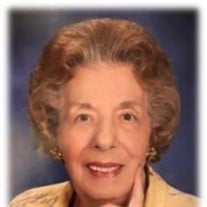 Kathleen “Kay” Ann Hilbrandt, born in Valley Stream, Long Island on January 26, 1924 passed away in her Orange City, FL home, surrounded by her loved ones on May 20, 2020. Raised in her beloved hometown,of Garwood, NJ, a 1941 graduate of Jonathan Dayton High School, Springfield NJ. Discovering a passion for aviation when she was a little girl lead her on an adventurous, life long career of aviation. She began flying lessons right out of high school at Staten Island (NY) & Martin’s Creek (PA) Airports, paying for her lessons working as a secretary in the Martin’s creek airport office. In 1943, Kay worked for Eastern Aircraft, a division of General Motors, as one of the first female mechanics for the TBM Avenger Bomber. By age 19 she had 85 hrs. of flight earned, & eagerly interviewed with Jacqueline Cochran & was accepted to join the civilian group called The Women’s Airforce Service Pilots (WASPs), stationed at Eagle Pass training base in Texas, serving during WWII. After the war, she returned home to NJ earning her Flight Instructor’s Rating, instructing at Lambrose & Mellor-Howard Seaplane bases in Ridgefield Park, NJ from 1945-1948. During this time, she also instructed veterans under the GI Bill of Rights helping them earn their private & commercial pilot’s licenses. In 1948, Kay was employed by The Bendix Corporation in Teterboro, NJ where she worked as a secretary until she retired in 1981. Throughout her working career, & even after retirement, Kay continued to fly for pleasure & remained active member of the Ninety-Nines, an international Organization of licensed women pilots founded by Amelia Earhart. In the 60’s she served as Governor of the Ninety-Nines NJ chapter. She participated in the Powder Puff Derby flight race with Selma Cronan, flying from California to Delaware placing in the upper 3rd & She would take 1st place in the Ninety-Nines spot landing contest, & is a Congressional Gold Medal Recipient, as well as a recipient of the FAA Wright Brothers Master Pilot Award, recognizing pilots having contributed & maintained safe flight operations for 50 or more consecutive years. Kay was a devoted Catholic, a proud Patriot, & an immensely generous woman always helping anyone in need, & regularly donating to various Veterans & Church organizations. She was an inspiration to all who met her, & will especially be whole heartedly missed by her 11 nieces & nephews, 18 great-nieces & nephews, & 17 great-great nieces & nephews! She is reunited in heaven with her parents, Francis Eugene Hilbrandt and Elizabeth Murphy Hilbrandt. Her older sister, Frances Marie Adase, and her younger brother Francis Eugene Hilbrandt, Jr. Services to honor Kay: Due to this past year’s covid restrictions, sadly we have been unable to honor Kay’s wishes and lay her to rest. We are honored to finally be able to do so this on August 14, 2021 at 11 am at St. Anne’s Catholic Church in Garwood, NJ,(open to all who wish to attend)an honorary funeral procession will be passing the home she grew up in on North ave in Garwood, to St. Gertrude’s Catholic Cemetery, Colonia, NJ where she will receive her military burial honors and be laid to rest, as she wished with her beloved parents and sister.

The family of Kathleen A. Hildbrandt created this Life Tributes page to make it easy to share your memories.

Send flowers to the Hildbrandt family.