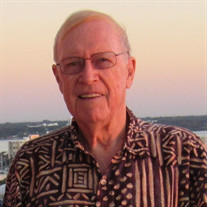 Franklin C. Teeter, 81, went to be with the Lord on Saturday May 16, 2020. He died unexpectedly at his home in Deltona, FL. Frank was a loving father and husband, married to his wife Geri for 56 years. He was born in Ithaca, NY and moved to Deltona, FL in 1987. He worked in the construction field his entire life, building significant structures at Cornell University and Ithaca College, and owned a construction company after moving to Florida. He is survived by his wife Geri, daughters Porsche and Cheryl, and son Leroy; brother Mike, sisters Mabel, Florence, and Mary; Grandchildren Nichole, Dustin, Michael Jr and Gabrielle; Great Grandchildren Austin, Mason, Gavin, Cayden, and Addison. He was preceded in death by his parents William and Anna, brothers Glenn, Harvey, Richard, Herb, Donald, Edwin and John; and sisters Anna and Myrtie. He leaves a family and many close friends who love him and will miss him dearly. Frank was a member of Faith Baptist Church, Deltona, FL and Cole Lake Church in Godfrey, Ontario, Canada. Frank served happily in his church on the budget and hospitality committees, organizing countless church picnics, and mens breakfasts. He participated in mission trips in Mexico, and Tennessee putting his construction talent and relationship building skills to work. He enjoyed meeting new people and forming lasting relationships. Frank was generous with his time and abilities, giving so much of himself to so many. Those who knew him witnessed his amazing problem solving skills and ability to fix most anything with what he had on hand. Frank was an Army veteran, and a Sgt. in the Reserves. He was an avid outdoorsmen who loved hunting in New York, fishing in Canada, shrimping in Florida, and boating. He was a NASCAR fan, loved Sudoko puzzles, and learned so much about technology. A memorial service will be held at 2pm on Saturday May 23rd at Faith Baptist Church, 1200 Providence Blvd, Deltona, Fl 32725. In lieu of flowers donations can be made on Franks behalf to Faith Baptist Church http://fbcdeltona.com/giving-5/ or the American Heart Association https://www.heart.org/. The VA will be placing a military marker at Cape Canaveral National Cemetery in Mims, FL in the future.

Franklin C. Teeter, 81, went to be with the Lord on Saturday May 16, 2020. He died unexpectedly at his home in Deltona, FL. Frank was a loving father and husband, married to his wife Geri for 56 years. He was born in Ithaca, NY and moved to... View Obituary & Service Information

The family of Franklin C Teeter created this Life Tributes page to make it easy to share your memories.

Send flowers to the Teeter family.