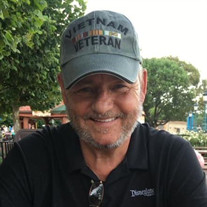 It is with great sadness that the family of David Young, 72 of Deltona, FL, announce his passing on November 15, 2018.Born on August 4, 1946 in Gainsborough, England, he took on the bold adventure to relocate to Missouri in the USA at the age of 14 to seek a better life. He continued to learn and work hard and did many things including teaching horse riding lessons before enlisting in the US military. He proudly served 21 years in the United States Army including multiple tours in Vietnam. During his deployment in Germany, he met the love of his life and married Anna H. Kopp on October 19, 1968. Upon his passing, they had just celebrated 50 years of happiness together. They also raised two children, David and Shirley, while living in Germany. He was preceded in death by his parents, and his three brothers Barry, Alan, and William. He will be lovingly remembered by his wife 'Marianne', his two children David and Shirley, their spouses Amanda and Ivan, his granddaughter Skylar, and several in-laws, nieces, and nephews in both England and Germany. Additionally he will be remembered by his extended family and close friends here in America. David had a passion for riding his road bicycle along the trails of Deltona and we were so proud that he put enough miles on his treasured Specialized Roubaix bike that he could have circumnavigated the globe! He was an avid sports fan and auto enthusiast who loved to watch European Soccer matches (especially his beloved Man U and FC Bayern), Formula 1 racing, the Tour de France and many motorcycle and auto races at Daytona Speedway. In his earlier days, he himself raced cars on dirt tracks. He was also an amazing cook who would create delicious and mouthwatering meals for family and friends. There is not another person around the "World Showcase" that has ordered as many Fish and Chips from the Rose and Crown at Epcot as David - always a favorite of his! A military service will be held at the Cape Canaveral National Cemetery on Tuesday, December 11 at 3:00pm. Cape Canaveral National Cemetery 5525 U.S Highway 1, North Mims, FL, 32754. In lieu of flowers, the family would like to request to have donations made to the Livestrong Foundation. Also, in the spirit of a great Man, Husband, Father, Opi, and Friend: next time you are out and having a good time, please raise a glass in honor of David. He will be looking down and SMILE!

It is with great sadness that the family of David Young, 72 of Deltona, FL, announce his passing on November 15, 2018.Born on August 4, 1946 in Gainsborough, England, he took on the bold adventure to relocate to Missouri in the USA at the age... View Obituary & Service Information

The family of David Young created this Life Tributes page to make it easy to share your memories.

It is with great sadness that the family of David Young, 72 of...

Send flowers to the Young family.