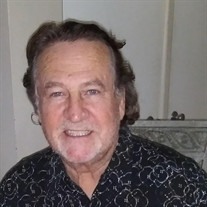 Steven Alan Rohde, age 65, of Debary- formerly of Longwood and, Kissimmee, FL and Decatur, IL, passed away on June 17, 2020. He was born on January 17, 1955 in Breese, IL. Steven is survived by his significant other, Debra A. Blanchard; daughter, Amanda Rohde; mother, Helen M. Poole Rohde: sister, Rebecca R. Neahring of Chicago, IL; brothers, Michael K. Rohde of San Diego, CA, David K. Rohde of Kathleen, GA, Thomas V. Rohde of Decatur, IL and Luke J. Rohde of San Diego, CA and his furry canine companions, Molly and Hazel and BooBoo kitty. He is preceded in death by his much beloved son Cordell Rohde and his father, David K. Rohde. Steven was proud to have served his country in the United States Air Force. He was also a life-long Republican and believed in all that American stands for and the opportunities for everyone. Steven attended Michigan State and was a staunch supporter of their football team, the Spartans. He was also a adamant fan of the New York Yankees baseball team. He had a career in sales because he truly enjoyed helping others. His final gift of helping others was to be an organ donor for the Lions Club. He was extremely proud of his children and spent many happy hours guiding them and enjoying the pleasure of watching them grow into young adults. He taught his son baseball and coached him and many others for several years. They shared such a love of baseball and the Yankees that they seemed inseparable. Steven taught his daughter how to play golf, deriving much enjoyment from her ability to "hit the ball farther than many in the LPGA." In his final days he enjoyed time spent helping others at the DeLand Lowe's indoor Garden Center. COVID 19 was NOT going to stop him. He enjoyed his home projects, working in the yard, playing fetch with the dog at Ponce Inlet's dog park, sitting in the back yard and watching the stars and thereby talking to his son. A Memorial Service will be held on a future date. Please contact the funeral home for information.

Steven Alan Rohde, age 65, of Debary- formerly of Longwood and, Kissimmee, FL and Decatur, IL, passed away on June 17, 2020. He was born on January 17, 1955 in Breese, IL. Steven is survived by his significant other, Debra A. Blanchard; daughter,... View Obituary & Service Information

The family of Steven Alan Rohde created this Life Tributes page to make it easy to share your memories.

Steven Alan Rohde, age 65, of Debary- formerly of Longwood and,...

Send flowers to the Rohde family.