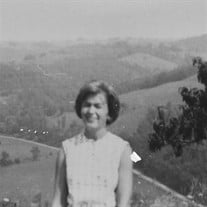 Sara Emily Natali, 93, passed away in her home on March 28, 2020. Sally was born on August 15, 1926 in Waynesburg, PA to Harold T. Closser and Catherine Ingrham Stewart Hoge. Sally was married to Paul William (Bill) Natali on June 30, 1945. Dad said they were “born” married, but sadly passed a few months before their 50th wedding anniversary. Sally worked as a bookkeeper for Palco, in Latrobe, PA. She was an avid reader and could finish a book a week. She enjoyed cooking for her family, reading on the back porch in the sunshine and going to the beach. She and Bill enjoyed traveling the country and visiting friends, and she got to see Italy in 2013 with her dearest friend and sister-in-law Betty Closser. She had a big heart of gold and was kind to everyone. She was interested in her grandchildren’s lives and often went to dinner with them and enjoyed playing Yahtzee and Uno – beware the Draw 4 card – she would give it to you in a heartbeat! She was loved deeply by all of her family and is survived by her daughter Barbra Natali (Joe Arnold); Bill Natali (Marsha Frankel), Bob Natali (Lynda Natali) and Chuck Natali (Cathy Natali) and her grandchildren Glenn (Heather Curtain), Bryan, Josh Burkin, Shane Burkin, Crystal Natali, Summer Natali and Meagan Natali. She also has great-grand children Grayson, Rachel, Lucas, Liam, Kieran, Gabe, Kaitlyn,Isabel, Aubrey, Avery, Braelyn and Lennox. Sally will be missed by everyone who knew her. We hope she is hugging Bill, Cathy, the O’Keefe’s, and all her friends in heaven, and watching over us all until we meet again. In lieu of flowers, please consider donating to the Alzheimer’s Association.

The family of Sara Emily Natali created this Life Tributes page to make it easy to share your memories.

Send flowers to the Natali family.