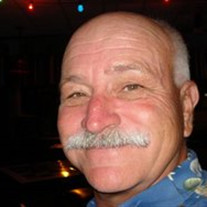 Robert Waldo Kinker was born on December 14, 1950 to James and Dorothy Kinker in Chicago, Illinois. His siblings include Ronald Kinker of Washington, Roger Kinker of California and Roseanne Kinker of California. Bob attended Marina High School in Huntington Beach, California. Bob loved to travel and experience new adventures, often recounting his memories of foreign lands. Bob was an avid roller skater, water skier, boater and anything else that had to do with speed. He was incredibly mechanically inclined and could fix anything. He often commented that he should have put his mechanical ability to good use by being a brain surgeon. Bob ventured to Reno, Nevada in the mid 80's where he learned the air conditioning and refrigeration trade. One night in 1988 while perfecting his dance moves, Bob met Patricia HofMann and asked her to dance. The two soon became inseparable and were married January 26th of the following year. In February 1989,Bob and Patty were blessed with their first child together, KassiAnna Marie Kinker. Bob was a very proud father and often paraded his daughter around to attract attention. A year and a half later, James Waldo Kinker, named after Bob's father, was born. In September of 1992, their last child, Robert Wayne Kinker was born. Bob very much loved and valued his family, including Patty's daughters, Shannon Graham and Emily Latimer of Oregon. Bob was also proudly 'Papa Bob' to three grandchildren; Anthony Lyon Ross, Annie Lee Latimer, and Sadie May Latimer. The family enjoyed traveling the country in their Winnebago motor home. The fondest memories of Bob were those of his smile as he cruised the open highways with his family near. The family moved to Oregon where Bob worked for Servco Inc. in Lebanon. He purchased a home in Sweet Home, Oregon, where he befriended everybody he met. His warm smile and the offer to help welcomed and kept friends. After much thought, the family ventured to Florida, enjoying the countryside as they traveled. The family arrived in Deltona, Florida in the Summer of 2000, where Bob had procured one of two beautiful homes in Treeshore Lakes subdivision. Bob enjoyed yard work, boating on the neighborhood lake, jet skiing, and teaching his sons how to fix anything mechanical. Bob never believed in idle time and often said "Don't wish your life away". He believed that to do a job right, it must be done correctly the first time. Bob always insured that his family was well taken care of, and he is best remembered for his loyalty to his family, friends, coworkers and customers. He had a sharp sense of humor and a very kind heart. While nothing written can ever do him justice, he leaves behind wonderful memories for everyone who knew him.

The family of Robert 'Bob' Kinker created this Life Tributes page to make it easy to share your memories.

Send flowers to the Kinker family.