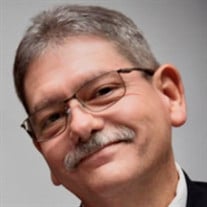 Richard “Richie” Anthony Cuebas of Deltona, age 62, passed away peacefully on Sunday July 19, 2020 after a 3 year battle with cancer, surround by his loving family. Beloved son of Ramon J Cuebas and Grace E Cuebas both of Carolina Puerto Rico; he was born January 6, 1958 in Coral Gables, Florida. Richard is survived by his wife, Brenda Ivette Cuebas; children, Richard Axmayer Cuebas and his wife Amanda Cuebas, Ryan Anthony Cuebas: grandchildren, Jaylee Luna, Audrina, Landon and Nolan Cuebas; mother, Grace E. Cuebas; brother, Roberto Cuebas; sister, Ana R. Cuebas. He is preceded in death by his father, Ramon J. Cuebas and brother, Raymond Joseph Cuebas. Richie was educated in Puerto Rico and graduated in 1976 from Antonio Sarriera Egozcue High School… He served 10 years in the U.S. Army, and loved traveling Europe with his wife, family, friends Kenny and Wanda and others while serving his military time. He then went to continue his education at Inter American University of Puerto Rico, graduating with a Bachelors of Art in 1981. He spent most of his career at the DEO for the state of Florida as a disabled veteran outreach program specialist. He valued and had so much pride helping the disabled veterans and his community. Richie was full of love and life humble to say the least. He was a kind soul and beautiful person. Some of his favorite things to do where swimming in the pool, playing dominos, listening to music, attending prayer groups, Cursillo de Cristiandad “De Colores”, and simply just being together. He would light up a room with his presence and smile. He most enjoyed spending his time with his family and friends. Richie cherished his sons Richard and Ryan, daughter Amanda and his grandbabies Jaylee, Audrina, Landon and Nolan. His wife Brenda was his everything! He loved his church community and took a lot of pride in his spirituality. He was an active member or St. Clare Catholic Church in Deltona. Richie was a unique example for everyone to follow. Family was most important to him and he savored in his role as Abuelo. He admired his parents, In-Laws, family and roots in Puerto Rico. He was well respected and loved by those on the Island as well as in the states. He left a legacy to everyone he touched with his selfless love. A true warrior till the end. An intimate Funeral Mass of 40 immediate family and friends will be held 7pm with a 6-7pm visitation, Wednesday, July 23, 2020 at St. Clare Catholic Church, 2961 Day Road, Deltona, Fl 32738.

The family of Richard Anthony Cuebas created this Life Tributes page to make it easy to share your memories.

Send flowers to the Cuebas family.