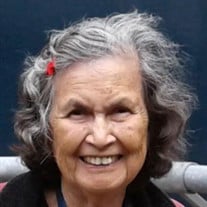 Marilyn Eunice Tremenheere Mill died peacefully under hospice care with loved ones around her, on Sunday, July 25th, just a few days shy of her 92nd birthday. Called “Onong” as a child, Marilyn Eunice was born in the highlands of British North Borneo— now Sabah, Malaysia— the daughter of Uti binti Basia and Harry Tremenheere. She lived through World War II’s Japanese occupation of Borneo with her mother and her aunt Inawi. After the war, American missionaries R. Melvin and Alma Milne took Marilyn Eunice under their wing. While living with the Milnes, she attended nurses training and worked in Singapore, Hong Kong, and Bangkok. In 1955, she travelled to the US for additional training at Washington Missionary College (now Washington Adventist University), where she met her future husband Rodney Mill, who had just returned from military service in Korea. Marilyn Eunice worked for 30 years as a nurse at Washington Adventist Hospital. After retirement, she lived and traveled extensively in Asia with husband Rodney, before settling in Deltona, Florida, where she spent the remainder of her life. Marilyn Eunice loved traveling the world, spending time with family in both the US and Malaysia, sewing, reading, watching educational programming, playing piano, and singing. She especially loved children, sharing her lovingkindness in children’s Sabbath Schools throughout her life. Marilyn Eunice was preceded in death by her husband of 48 years, Rodney Mill. She is survived by her children Rebecca Lawrence, Michael Mill, and Lizette Mill, her sister Heather Norwood, eight grandchildren and five great-grandchildren. Services will be held on Sunday, August 8th, at Deltona SDA Church, 1717 Catalina Boulevard, in Deltona, FL. Family visitation will be held at 6:00 pm, with a celebration of life following at 7:00 pm. The 7:00 pm service will be live-streamed on the Deltona SDA church YouTube channel https://youtu.be/RxxEEonvbqk. Donations in Marilyn Eunice’s memory may be made to the Adventist Disaster Relief Agency.

Marilyn Eunice Tremenheere Mill died peacefully under hospice care with loved ones around her, on Sunday, July 25th, just a few days shy of her 92nd birthday. Called &#8220;Onong&#8221; as a child, Marilyn Eunice was born in the highlands of... View Obituary & Service Information

The family of Marilyn Eunice Mill created this Life Tributes page to make it easy to share your memories.

Send flowers to the Mill family.