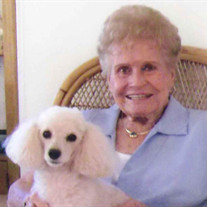 (October 1, 1920 – August 26, 2018) Ginger Leitheiser, 97, passed away on Sunday, August 26, 2018 in Orange City, Florida. Ginger was born on October 1, 1920 to Thomas Ruby in Atlanta, Georgia. While growing up, she and her younger sister, Marti, sang and played several musical instruments. Her beloved husband, Richard (Dick) preceded her in death, along with her younger sister, Marti, brother Thomas, and her parents. She is survived by her daughter, Dale, from Iowa, one granddaughter, Danielle, also from Iowa and a niece, Renee. Ginger met the love of her life, Dick Leitheiser, and they eventually moved to Palm Coast, Florida. It was there that Ginger sold real estate and was the top sales associate earning numerous sales recognitions from Coldwell Banker. Upon retiring, Ginger and Dick moved to John Knox Village in Orange City. Ginger will be laid to rest with her husband at Greenlawn Cemetery in Jacksonville, FL on September 8, 2018.

The family of Mabel Leitheiser created this Life Tributes page to make it easy to share your memories.

Send flowers to the Leitheiser family.