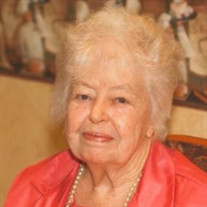 June Wagstaff Rutigliano, born on 6/18/1926, the second oldest of eight children born to Arnold and Edith Wagstaff passed away on July 4, 2021. She attended Saint Gregory’s to 8th grade and then attended Our Lady of Mercy Catholic High School. Upon graduation, she was accepted and studied at the prestigious Pratt Institute in New York as an art major. June went on to win first prize in statewide competition for her works in ceramics, sculpture and painting. Her paintings, mostly watercolors, adorn the walls of her home and those of family and friends. On January 3, 1943, she met the love of her life at roller rink in Brooklyn, NY. She was 16 he was 17 and it was the beginning of a true and extraordinary love story. They were married on 9/7/1947. A love story that flourished for 72 years. Hours before his death, October 26, 2019, he raised his hand to June’s face and said, “I adore you”. June is predeceased by her 7 siblings, Viola Kipling, Gerald, Thomas, Arnold, Leroy (Richard), Lawrence and William Wagstaff and a daughter Melinda Ann in 1975. She is survived by her son John, daughter JeanAnn, son-in-law Sal, four grandchildren, John, Michael, Zachary & Spencer and 3 great-grandchildren, Brooklyn, Vegas and a new baby boy due in September. There will be a Memorial Service at John Knox chapel in Orange City, Fla at 11:00am, Saturday, July 17, 2021. The family also plans a Celebration of Life at a future date in Somers, NY her final resting place where she will join her beloved Bill and their daughter Melinda.

June Wagstaff Rutigliano, born on 6/18/1926, the second oldest of eight children born to Arnold and Edith Wagstaff passed away on July 4, 2021. She attended Saint Gregory&#8217;s to 8th grade and then attended Our Lady of Mercy Catholic High... View Obituary & Service Information

The family of June T Rutigliano created this Life Tributes page to make it easy to share your memories.

Send flowers to the Rutigliano family.