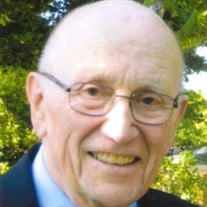 John Dennis Keane, 92 of Deland passed away on January 19, 2021. He was born on October 15, 1928 in Newton, Iowa to parents George C. Keane and Caroline H. (Stammer) Keane-Clark. John lived his early years in Manning, IA. He graduated from Manning High School and went on to graduate from the University of Iowa, College of Business, in Iowa City. John also served in the U.S Army during the Korean War. He worked for thirty years as a Marketing Representative for IBM, the last 17 years as the team leader handling John Deere & Company worldwide. After early retirement from IBM, he worked as Vice President of Davenport Bank & Trust, Davenport IA, which is now Wells Fargo Bank Iowa. John and his family lived in Cedar Rapids, IA, Waterloo, IA, Minneapolis, MN and Moline, IL as he pursued his career with IBM. After retirement he and his wife have lived in Pompano Beach, Port St. Lucie and Orange City, Fl. He was married to Mary Ellen (Colbert) Keane in Iowa City in 1950. John is preceded in death by his wife, Mary Ellen Keane; son, James Keane; parents and stepfather. He is survived by his son Mark Keane, six grandchildren and six great-grandchildren. John was a member of several golf clubs as he moved to various cities. He was also active in Rotary, Boy Scouts and United Way. His consummate avocation was bicycle touring and he was an active member of Quad Cities Bicycle Club. He has ridden his bicycle across the U.S, across a portion of Australia and on bicycle tours across Florida, Georgia, North Carolina and Virginia. There is an annual bicycle tour across Iowa and John rode it thirty times. In lieu of flowers donations may be made to Second Harvest Food Bank.

John Dennis Keane, 92 of Deland passed away on January 19, 2021. He was born on October 15, 1928 in Newton, Iowa to parents George C. Keane and Caroline H. (Stammer) Keane-Clark. John lived his early years in Manning, IA. He graduated from Manning... View Obituary & Service Information

The family of John Dennis Keane created this Life Tributes page to make it easy to share your memories.

Send flowers to the Keane family.