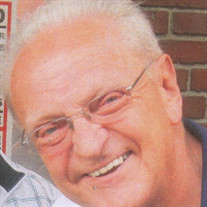 Jerry Roger Carlson 73 passed away February 12, 2022. He was born April 20, 1948 in Hazelhurst, Wisconsin, where he lived and grew up with his parents, Alice and Bill and his younger brother, Frank. Jerry is survived by his wife Wanda “Jaye” Carlson and their daughter and son in law, Kathy and Jason Henderson; grandchildren, Braeden and Avery; and other close relatives, brother Frank, Tim & Sarah Carlson; Hailey Carlson; Ryan Carlson; Melissa & Steve Bucklew; Georgia Mae Rose and Dylan Wayland. Jerry joined the United States Navy fresh out of high school where he served our country for two years serving most of that time being stationed in the Mediterranean. Jerry was a great patriot, and the American Flag was a very important symbol to him. Anyone who knew Jerry well knows he always teared up when hearing the National Anthem. He strongly believed in “Kneel for the Cross, Stand for the Flag”. After his military service, he returned home to Wisconsin where he started his career in the rental car industry with Avis where he worked in Ohio, Chicago and then Southern California where he met his future wife Jaye through mutual friends and married in 1985. He then joined Dollar Rental Car in Southern California and transferred to Tulsa, Oklahoma as Director of Licensee Operations until his retirement in 2013. After retirement Jerry and Jaye moved to Florida to be near their daughter, Kathy and her husband Jason and children, Braeden & Avery and also near Jaye’s brother Earl and wife Natalie. Jerry was a kind and true gentleman who was loved and respected by all who knew him. He always thought of others first—he even made sure the coffee pot was on before everyone arrived at work. He was always the greatest neatnik—you couldn’t leave the room and return before your beverage had been picked up and disposed of properly. His grandchildren deemed him “the greatest salsa maker ever!” He loved watching his grandson play baseball and his granddaughter perform in cheerleading competitions. He loved sports especially the GREEN BAY PACKERS and NASCAR and as a younger man played and coached softball for many years, while advancing their C Division League up to an A Division. Jerry was a member of the Volusia County Skeet & Trap club where he shot skeet and five stand. Enjoying cigars and great camaraderie was always an added bonus. In lieu of flowers, donations can be made to the Navy Veterans at www.nmcrs.org (Navy Marine Corp Relief Society)

Jerry Roger Carlson 73 passed away February 12, 2022. He was born April 20, 1948 in Hazelhurst, Wisconsin, where he lived and grew up with his parents, Alice and Bill and his younger brother, Frank. Jerry is survived by his wife Wanda &#8220;Jaye&#8221;... View Obituary & Service Information

The family of Jerry Roger Carlson created this Life Tributes page to make it easy to share your memories.

Customized sympathy cards. Mailed for you.