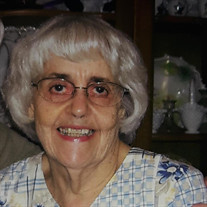 Janet Young McNeice, age 82, passed away peacefully August 9, 2020 after a long and courageous battle with Alzheimer's Disease. She was born and raised in Kings Park, New York, which is where she met the love of her life, Raymond Roy McNeice. Janet and Roy grew up across the street from each other and were friends for many years. Then on September 14th, 1960 the friendship became a marriage that would last for 60 years. There were good times and bad. There were successes and failures. There was happiness and sadness. No matter the struggle or triumph, Roy and Janet always lived through it as loving friends and partners. Janet’s adventurous spirit gave her a love for travel. She would often go for drives with the family and take roads just to see where they went. Fortunately, she had a great sense of direction and was able to keep us from getting lost (for too long anyway). One particularly exciting trip was a visit to the Keys to go camping and boating. The boat sunk and her son, Paul, broke his eardrum and was attacked by a sea urchin. Paul was always in trouble but she loved him in spite of it. One of her favorite things in life was to show her family and friends how much she loved them by cooking for them. She was adventurous in the kitchen with some success and as all truly experimental people know, some not so successful. Well remembered is the experiment of adding jalapeños to the hamburger meat. Not a novel idea but you might want to mention it before the family eats it. One of her greatest successes was her healthy oatmeal chocolate chip cookies. She was always trying to cook healthy for the family. She once tried to pass off liver as steak (apparently it was considered healthy back in the day). Her loving daughter Susan mentioned that the steak smelled bad. Janet said, “No it doesn't. It's steak, eat it you'll like it”. Her big success in the kitchen was lasagna. She made THE BEST lasagna and it started with her own sauce. Her grandson, Paul Jr. remembers her this way. “Grandma could feed you a 5 course meal and still ask if there was anything else you would like”. Janet was also an artist. Music, painting and photography were a big part of her life and this is a trait that she passed on to her children and grandchildren. In photography, Janet often pushed the family to the point of irritation having them all pose for long periods of time while she lined up the photo. Now, we're so grateful for these photos. There are so many wonderful memories. With music Janet was very open and enjoyed many different genres. Janet played the piano and was also a long time member of her local church choir. She would often sing in duets and trios too. At home she would often dance along with the kids or grandchildren to whatever they were listening to at the time. Living in Florida, Janet was somewhat removed from friends and family based in the Northeast but there were many visits both directions. Janet loved to visit her cousin Lynn whom she considered a sister and best friend. Janet and Lynn spent many hours on the phone together and visited as often as life would allow. She also enjoyed visiting her brother Richard Young, his wife Nancy, and their children Dee, Sandy, and Mark. With so many friends and family, Janet lived a full and wonderful life. Her faith in God and her love for Roy and her family were her guiding lights. Her husband Roy and daughter Susan took care of Janet in her final years. Their love and devotion allowed Janet to live out those days with love, care and happiness. Roy uses a Bible verse when he remembers his wife of 60 years. Proverbs 31:10-12 “If you can find a truly good wife, she is worth more than precious gems! Her husband can trust her and she will richly satisfy his needs. She will not hinder him but help him all her life”. As well as a host of family and friends, Janet is Survived by her husband, Raymond Roy McNeice, daughter Susan McNeice, son Paul McNeice, and grandchildren Paul McNeice Jr., Alexander McNeice, and Monica McNeice and her beloved cat, Kisa who misses Janet very much. Her other granddaughter, Brigette McNeice is walking with Janet in heaven. In Lieu of flowers, donations may be made to Alzheimer's Association https://www.alz.org/get-involved-now/donate.

Janet Young McNeice, age 82, passed away peacefully August 9, 2020 after a long and courageous battle with Alzheimer's Disease. She was born and raised in Kings Park, New York, which is where she met the love of her life, Raymond Roy McNeice.... View Obituary & Service Information

The family of Janet McNeice created this Life Tributes page to make it easy to share your memories.

Send flowers to the McNeice family.