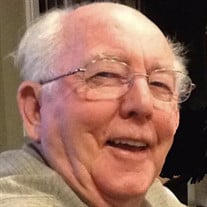 John N. “Jack” Ward, formerly of Williamsville, New York, died Tuesday, February 8, 2022 in Orange City, Florida. He was 89 years old and of the Protestant Faith. A memorial service is scheduled for Saturday, May 14, 2022 at 10 AM with burial immediately following at Griffins Mills Cemetery, New York. He was born April 9, 1932, in Buffalo, New York; son of Arthur and Lois (Newell) Ward. In addition to his parents, he was preceded in death by his wife, Joyce K. (Krajewski) Ward, his brother, Arthur K. Ward, and sister-in-law, Helen Ward. He is survived by two sons, Glenn (Mary) Ward of Orange City, Scott (Sandra) Ward of Deltona, Florida, and one daughter, Sandra (Ed) Phillips of Mashpee, Massachusetts. He is also survived by three grandchildren, Jason Ward of Casselberry, Florida, Michael Ward of Highlands Ranch, Colorado, and Amanda Wells of Mashpee, Massachusetts, and two great-grandchildren, Colton Ward and Lexi Ward. Jack was an Army veteran, serving during the Korean conflict. After a life long career in the automotive service industry, working his way up from mechanic to the Director position at Glen Campbell Chevrolet, Williamsville, New York. He moved to Florida to be closer to family. He enjoyed his retirement with friends from the local chapters of the VFW and Moose Lodge and had recently moved to The Springs of Parc Hill in Orange City where he passed the time with the good company of his long-time friend, Eleanor Shipley, sharing stories while in their rocking chairs on the front porch or listening to their favorite tunes played by “Alexa” or watching movie classics. The family requests memorials to the American Macular Degeneration Foundation (AMDF) (www.macular.org).

The family of Jack N. Ward created this Life Tributes page to make it easy to share your memories.

Send flowers to the Ward family.