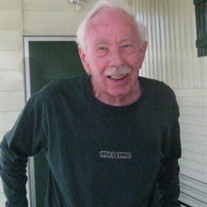 Gordon Seibert Manderbach, 95, of Lake Mary, Fla., died March 21, 2020, at Renaissance Assisted living in Sanford, Florida. Mr. Manderbach was born September 24, 1924 in Lebanon, Pa, to William Manderbach and Hilda Hockley. He graduated from Lebanon High School in 1941, where he played the Oboe in the high school orchestra, in addition to his general studies. Shortly after graduation, he enlisted and served in the US Army Air Corp. Although he entered as an enlisted man; he was later promoted to Second Lieutenant after completion of course work through Mississippi State University. He went on to become a fighter pilot; and trainer of Airman flight study and emergency procedure with the 344th AAF Base Unit at Drew Field in Tampa, Florida, through November of 1945. In his career, Mr. Manderbach served in the family Floral business and later became a Real Estate Agent for the Harry Fischer Agency before moving to Casselberry, Florida and entered retirement. Through his life; Manderbach was an avid outdoorsman and enjoyed music. He enjoyed cooking and he continued to practice music and play his keyboard until his last few months. Mr. Manderbach is preceeded in death by his parents, a half-sister, the late Betty Lou Coker of Fernandina Beach, Florida and a half-brother; the late Clifford Manderbach of Lebanon, Pennsylvania. He is survived by his wife, Irene Manderbach of Sanford, Florida; two daughters, Kay Tobias of Orange City, Florida and Constance Krall of Indian Harbour Beach, Florida, a son, David Gordon Koons of Fort Lawn, South Carolina; six grandchildren; and five great-grandchildren. Due to the Corona Virus precautions; a memorial service will be postponed until further notice. Arrangements are being handled by Baldauff Family Funeral Home. Flowers are not being accepted. However; in lieu of flowers; donations to the Donald J. Trump re-election Campaign can be made in Gordon’s memory. https://secure.donaldjtrump.com/donate/?utm_source=search_google_sitelink&utm_medium=ad&utm_ campaign=2019_support_djt_generic_search&utm_content=djt_ fundraising_sitelink_test_donate_here&gclid= Cj0KCQjw9tbzBRDVARIsAMBplx9CR0-o0UvJWA1ykZsF2o6TCcphLvccP5Jt88DNjVjGIXTh77tQ_X4aAoWHEALw_wcB

The family of Gordon Seibert Manderbach created this Life Tributes page to make it easy to share your memories.

Send flowers to the Manderbach family.