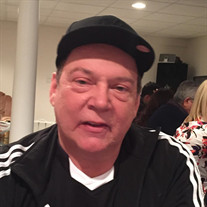 Celebrate the life of Georgios Tzotzis born March 3, 1964 – died June 30, 2019. George was a beautiful, kind, loving, hardworking husband and father. He impacted the lives of many many people. He would leave an everlasting impression upon his embarkment. He loved to cook and feel the many encounters even the strangers and farthest ones. He certainly was one in a million. He is loved by so many people, especially his wife Lily Tzortzis, who loves and adores him and will always love him. He was her all, also his children; Gino, Georgio II, Giano, Abby Gail, and Samantha. His son’s-in-law Octavio and Jason; daughter-in-law Jessica; grandchildren Gabriela, Alex, Mason, Gorgous, Georgio III, Adonis, Sophia, and Theo; brother John Tzortzis; sister Helen Vitogiannis; uncles and aunts Kiki, Dina Filia; father Anthoney and other nieces Angela, Alexus, Amelia, Angie; nephews, Nicklos, Johnny; cousins Georgios, Peter, Anstacia, Gina; sister-in-law the late Jane Tzortzis, sister’s-in-law Sheila, Joan, Kay, Shamilla, and Neele; brother’s-in-law Chuck, Shaheed, Stalin, Kevin, Steffon, Tony. A few of his many friends Steve Miller, Dibby, Marty Rosen, Al Schultz, Chris just to name a few. A handful of family members who hold such a precious space in his heart, the love he has for Pico, Caitlin, Ali-baba, and Devin. This handful of people has significant memories to him as well as them. I know they will cherish and live on and every time they think of him they will smile and say that’s Uncle George the one and only. He will be missed tremendously. Celebration of life from 4pm to 7pm, Friday, July 5, 2019 at Deltona Memorial Funeral Home & Crematory, 1295 Saxon Boulevard, Orange City, Florida.

Celebrate the life of Georgios Tzotzis born March 3, 1964 &#8211; died June 30, 2019. George was a beautiful, kind, loving, hardworking husband and father. He impacted the lives of many many people. He would leave an everlasting impression... View Obituary & Service Information

The family of Georgios Tzortzis created this Life Tributes page to make it easy to share your memories.

Send flowers to the Tzortzis family.