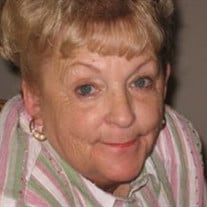 Gayle Marrison, the loving wife of Donald Marrison Sr., died unexpectedly Monday, April 12,2010, after complications from surgery. Gayle was born in Youngstown to Thomas and Jean Curran, enjoying a wonderful childhood with her sister, Julie, growing up in Ashtabula, Ohio. Gayle married her sweetheart, Don, when she was just 16 years old. Their wedding song was "16 Candles," honoring their young age. They were happily married for nearly 51 years, with three boys - Don, Ben and Jerry. They spent much of their married life in Ashtabula, Ohio. Gayle loved playing bingo, bowling, going boating and enjoying her family. She and Don made many lifelong friends in Ashtabula, including a special relationship with their neighbors, Tom and Darlene Labry. Gayle and Don moved to the Orlando area in 1983, creating wonderful friendships everywhere, including the Moose lodge and the local Lions club. Her family gave Gayle immeasurable joy. The walls of her home were covered with photos of her husband, their children, and their children's children. Gayle was blessed with 9 grandchildren: Stephanie, Jerry Jr., Tim, Mindy, DJ, Matt, Amy, Rachel and Sam, and 1 great-grandchild, Isabelle. She was equally blessed with wonderful daughters-in-law: Debbie, Ellen and Kelly. Gayle was one of the most caring, generous people God ever put on the earth. She was quick with a smile, and even quicker with a hand. She had a wonderful laugh, often throwing her head back as she laughed and crinkling her nose. The doozies would bring tears of joy to her eyes. She was a master in the kitchen, famous for her Texas sheetcake, macaroni salad, "sick soup", lasagna and signature macaroni and cheese. She was famous for her Buckeyes as well. Gayle will be greatly missed on earth, but happily rejoined in heaven.

The family of Gayle 'Gayle' Margaret Marrison created this Life Tributes page to make it easy to share your memories.