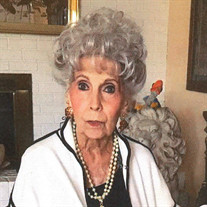 EDNA JANE BLANKENBURG (May 04, 1931 – August 22, 2018) Edna Blankenburg, 87 Passed away on Wednesday August 22, 2018 in Orange City, Florida surrounded by her family. Edna was born on May 04, 1931 to Francis and Rachel (nee: Blauvelt) Lazarski in Hawthorne, NJ and later settled in Bedminster NJ with her family before moving to Florida. Her beloved husband Kenneth preceded her in death along with her eldest daughter Melanie Wright, grandson Wayne Wright, her parents and sister, Evelyn Defeo. She is survived by four children, Kenneth Blankenburg (Lois), Jeanne Blankenburg, Heidi Blankenburg, Honiegay Young (Brett), a sister Susan Casson Banford, three grandchildren, Amanda Woods (Taft), Cory Malloy, Natasha Allgors (Russ) and four great-grandchildren Sydney Allgors, Emmett Allgors, Alex Wayne Wright and Kyle Anthony Wright, two nieces and one nephew. It was while working in a bakery as a young girl that she met and married the love of her life and they spent 68 years together until his passing in 2016. Edna was a professional handler and breeder of AKC Registered German Shepherds. She trained and donated several dogs to The Seeing Eye as guide dogs. She sewed all of her children’s clothing when they were young. She was also a very talented artist who owned her own ceramic kiln and created many beautiful figurines. Her greatest enjoyment was being a loving mother to her children. Visitation will be on Monday August 27th at Baldauff Funeral Home in Orange City, FL from 4:00 to 7:00 PM. Services will be held at the funeral home on Tuesday August 28th followed by Private Family Internment Service where she will be laid to rest with her beloved husband at DeLand Memorial Gardens in DeLand,FL.

The family of Edna Jane Blankenburg created this Life Tributes page to make it easy to share your memories.

Send flowers to the Blankenburg family.