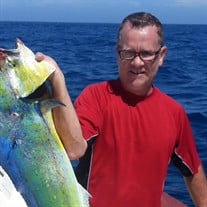 Brian Chambers (54) of DeLand Fl, died at home on March 3, 2021 after an extended illness. Brian was born on May 20, 1966 in Cleveland, TN the son of Jackie Shattles Chambers and Edgar Chambers III. He graduated from Robert E. Lee High School in Jacksonville, FL and received a B.S. degree in Biology from Randolph Macon College in Ashland, VA. He worked for several different biotechnology companies in San Diego CA before becoming disabled and moving first to Manhattan, KS and then to DeLand, Fl. Brian was vivacious, a fantastic cook, and a great lover of adventure; boats, the beach, and all things water related. When he was 18 he climbed the Acosta bridge (over 1,600 ft) in Jacksonville (got in big trouble for that one!). At 28 he spent a year wandering through Indonesia where he lived for several weeks with a headhunter tribe on Borneo that was off limits to foreigners. At 35 he spent 6 months meandering through Central America and flew to Brazil for several months after that. During his life he published research articles on subjects ranging from tiger beetles to flavor of phosphate in meat. As a scientist at several companies, he helped develop rapid test kits used in doctor’s offices for diseases such as chlamydia and congestive heart failure. Later he spent many years working as a corporate liaison to the US Food and Drug Administration for various companies. He is survived by his brother Edgar Chambers IV (Delores) of Manhattan, KS; sister Deanna of DeLand, FL; sister Leigh Wynn (Michael) of Douglasville, GA.; two nephews, Edgar Chambers V and Jack Wyyn, and a niece, Laura Wynn; and his beloved dog Zumba. He was preceded in death by his parents. He was a beloved brother, uncle, and friend and will be missed tremendously. He was cremated and burial will take place in the family plot at Westview Cemetery, Atlanta, GA. No services will be held and the family requests no flowers.

Brian Chambers (54) of DeLand Fl, died at home on March 3, 2021 after an extended illness. Brian was born on May 20, 1966 in Cleveland, TN the son of Jackie Shattles Chambers and Edgar Chambers III. He graduated from Robert E. Lee High School... View Obituary & Service Information

The family of Brian Chambers created this Life Tributes page to make it easy to share your memories.

Send flowers to the Chambers family.