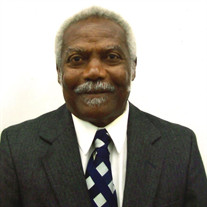 Antoine C Cange, a loving husband, father, grandfather, brother, and uncle, passed away on February 10, 2021. After months of battling illness, he was called upon our heavenly father at the age of 83. Born on April 24, 1938 in Gros Morne, Haiti, Antoine was nurtured and raised by his mother, Elia Debreus after the passing of his father at the age of 2. He spent his childhood through young adulthood, along with his siblings Henry, Camilla, and Julienne, in his beloved Caribbean homeland. There he would father two lovely daughters, Marie, and Chantale. At the age of 31, he arrived in New York in “Western cowboy attire” but quickly adjusted to the metropolitan way of living and built a career navigating the busy streets of New York. After admiring from afar (who would eventually become the love of his life), Maryse Audant, and finding a conduit through his future mother-in-law, Maryse and Antoine became a formidable couple. During their 45+ years together, Antoine and Maryse created a collaborative partnership-working together to blend and raise their children: Kelly, Kendall, Marie, Jude, Bobby, Carl, and Madsen. He was a gracious, loving husband who understood the key to a happy marriage- to support and empower his wife, never tempering her strength. With the two of them at the helm, they enhanced and enriched the lives of not only their immediate family but extending family members and friends as well. Antoine was a stoic, kindhearted, hard-working man. He carried himself with quiet dignity and immaculate sense of style. Although he was a quiet man, he had a great sense of humor and loved to playfully tease his adoring wife. He possessed an incredible work ethic, generosity, initiative, respect, and resourcefulness, traits that he modeled and tried to instill in his children, and eventually his grandchildren. As a grandfather, he was selfless and adoring, who doted on his grandchildren-caring for and supporting them, actions he had committed to his entire life. His memories and legacy will be carried on by his soulmate and wife of more than 45 years, Maryse Cange, daughters: Marie, Chantale, and Kelly, sons: Kendall, Jude, Bobby, Carl, and Madsen, grandchildren: Daisy, Kiana, Josh, Anastasia, Kesean, Kyle, Malaya, Nahlania, Sophia, and Madsen Jr. He will forever be in our hearts and loved forever. Antoine Cange Funeral Reception to follow after service. The new venue for the repast: Deltona Women’s Club 1049 E Normandy Blvd Deltona 32725 Please RSVP 347-455-2841 http://gfwcdeltona.org/

Antoine C Cange, a loving husband, father, grandfather, brother, and uncle, passed away on February 10, 2021. After months of battling illness, he was called upon our heavenly father at the age of 83. Born on April 24, 1938 in Gros Morne, Haiti,... View Obituary & Service Information

The family of Antoine C Cange created this Life Tributes page to make it easy to share your memories.

Send flowers to the Cange family.